Home » Behind the Catholic Counter » St. Martin of Tours Day and Veterans’ Day

Today is Saint Martin's Day! Also known as Martinmas, Saint Martin of Tours Day has long been an important feast in the Church. Traditionally marking the end of autumn and the harvest season, Saint Martin's Day originally began a period of forty days of fasting, like Lent. That season was eventually shortened into Advent as we know it now, but Saint Martin's Day still remains a major feast around the world, and has many colorful traditions associated with it. 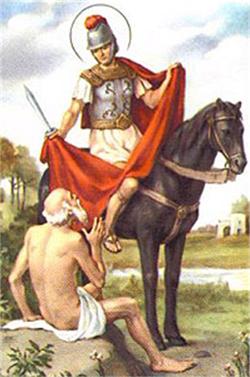 Saint Martin's Day is dedicated to Saint Martin of Tours, the Roman soldier who was baptized and became a monk, most notably known for his patronage of the poor and children. The feast originated in France before spreading across Europe in the 4th Century, and was regarded as a festive day. Because Martinmas preceded a period of fasting, celebrations usually including feasting, bonfires, and merriment.

The slaughter of the “Martinmas beef” is traditional, as is the eating of goose. The goose is a symbol of Saint Martin due to a story that, while attempting to avoid being named bishop, Saint Martin tried to hide among geese in a pen; he was betrayed by the birds' commotion.

While the beginning of Martinmas varies from place to place—some areas begin celebrations on Saint Martin's Eve—parades through town are common. Children light lanterns and candles and sing songs, and are rewarded with sweets and candies. In many Eastern European countries, small presents are given as well.

Some countries substitute duck for the goose as a traditional food; in general, the mood is much like that of American Thanksgiving. Saint Martin's Day also signifies the transition to winter work in many places. Women move their work inside for the following months, while men transfer their duties from the fields and the harvest to the forest, preparing for the winter.

St. Martin's Day also became a traditional day to sign peace treaties. Is it a coincidence that the armistice ending World War I was signed on St. Martin's Day? It may have just been poetics that King George V chose the 11th hour of the 11th day of the 11th month for the signing, but the fact that it fell on the feast day of saint who gave up his arms and became a martyr is God's kind of coincidence.

In all, Saint Martin's Day is a joyous feast, and a time of change. It marks the beginning of preparations for the new season…and for the coming birth of Christ!