Home » Behind the Catholic Counter » If Mary Isn’t the Theotokos, the Mother of God, Who is She?

If Mary Isn’t the Theotokos, the Mother of God, Who is She?

On December 31 we usher in the New Year with late night champagne, half-baked resolutions and epic movies. But in the midst of this activity the Church asks us to celebrate the Solemnity of Mary, the Theotokos – the Mother of God; a feast day of epic proportions and fulfilled covenants, a dogma that sheds as much light on the nature of Christ as it does on the nature of His mother.

Marian dogmas all depend on one thing.

The Church has defined four dogmas pertaining to Mary. They include Mary, the mother of God, her perpetual virginity, Immaculate Conception, and her assumption into heaven. It is because of the first Marian dogma that she has been privileged with the other three. Therefore, it is essential to understand the meaning and implications of this doctrine before attempting to explain the more complicated and controversial Marian dogmas.

Listen to a hymn to the Theotokos

The doctrine of Mary as the mother of God finds its roots in the New Testament when the archangel Gabriel says to Mary, “The Holy Spirit will come upon you, and the power of the Most High will overshadow you; therefore the child to be born will be called holy, the Son of God” (Lk 1:35). The Gospel of Matthew also affirms the doctrine in 1:23, “Behold a virgin shall conceive and bear a son, and his name shall be called Emmanuel (which means, God with us)”. This dogma was formally defined at the council of Ephesus in 431 when the Church gave Mary the official title Theotokos which literally means Christ-bearer.

An insufficient understanding of the Theotokos has caused some people think that if Mary is the mother of God, she must have somehow preceded God and given birth to Divine triplets. This vaguely resembles some pagan beliefs but it certainly is not the Christian understanding of Mary. In fact, this deduction shows a backwards approach the relationship between God and his mother. It is not Mary who entered eternity with the Incarnation; it is God who entered time. We can't elevate Mary to the level of creator because it was God who lowered Himself to be one of the creatures. 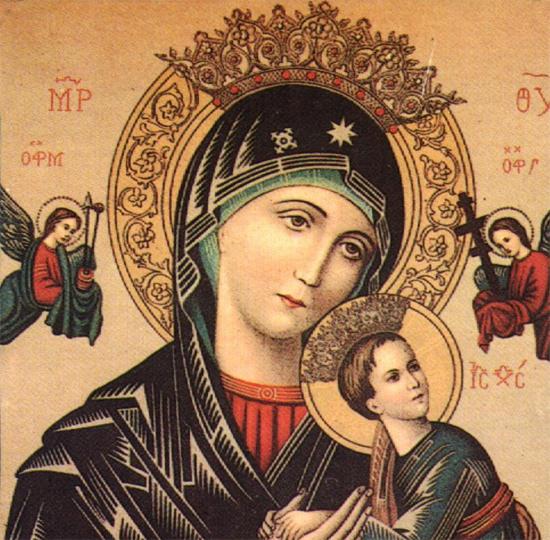 What was Mary the Mother of? We have to ask ourselves, “If not the mother of God, then the mother of whom?” It is essential that we define what we mean by “nature” and “person” when we speak of Jesus being one person with two natures. Nature is the permanent structure of a being and the source of all activities of that being whereas Person defines the self-conscience, rational being that answers the question “Who am I?” Put simply, nature is the source of actions, but person is responsible for them. In Jesus then there are two sources for His actions, one human and one divine, but it is His one person that manifests them. His relationship with His mother is like that of any mother/child relationship in that it is not nature-to-nature, person-to-nature, or nature-to-person. It is a person-to-person relationship. Just as we would never say, “My mother is the mother of my body,” so Jesus would never say it because Mary was not merely an incubator for a god-creature. John Paul II said, “Mary is the Mother of God’s Son, whom she virginally begot according to His human nature and raised with her motherly love, thus contributing to the human growth of the divine person who came to transform the destiny of mankind.”

Why Honor Mary? When we honor Mary we are following the example of Jesus who honored His mother. Scott Hahn said that Jesus fulfilled every letter of the Law. The first of the Ten Commandments that pertain to one's neighbor is to honor one's mother and father. In Hebrew “to honor” means “to give glory”. It was not the Church that initiated the honor given to Mary; it was Jesus who bestowed great glory on her first.

Just as the New Year marks a time for new beginnings, so the feast of the Mother of God marks a new beginning for the world. History was split, the Old Covenant was fulfilled and we all became sons and daughters of God.